Every Picture Tells a Story

The Netwatch Year of the Family Carer is all about paying tribute to Ireland's 355,000+ family carers. The Covid-19 pandemic has had a massive impact on family carers’ physical, emotional and financial wellbeing. Many have been left isolated, without essential supports and services and facing burnout.

In response, Family Carers Ireland has set up a National Hardship Fund to provide vital supports to those most in need as family carers continue to navigate the pandemic and all the challenges it has brought. Through our special photo exhibition called “Every Picture Tells a Story”, we have featured 10 family carers, whose photos you can view below along with their story. Each photo is available to purchase by companies or individuals who would like to pledge their support to this National Hardship Fund. Each family carer who has taken part in this exhibition represents thousands more in homes all over Ireland.

Family carers are our wives, husbands, sons, daughters, aunts, uncles, grandparents, cousins, friends and neighbours. They are the backbone of our society and we want carers in every part of the country to know that Family Carers Ireland sees you and is here to help. We believe that no one should have to care alone.

To learn more about how you can take part and assist Family Carers Ireland in our mission to improve the lives of family carers, please scroll down for more information. 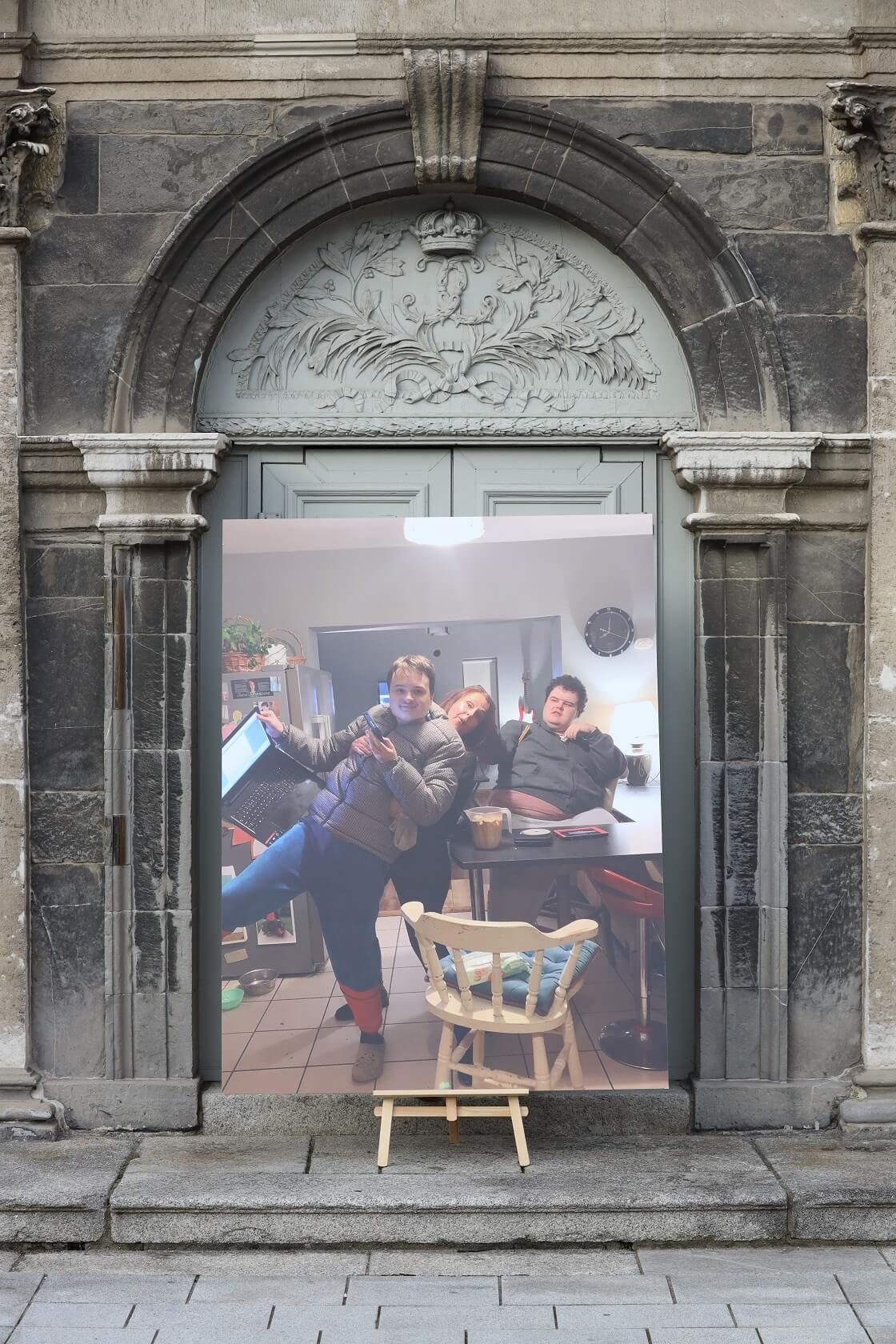 Jane Johnstone lives in Baldwinstown, Co. Wexford with her two sons Evan (20) and Daniel (16). While both are on the autism spectrum and require 24/7 care, Evan’s needs are particularly complex as he also has a profound intellectual disability, a degenerative eye disease, mobility impairment and is non-verbal.

Jane, whose daughter Ciara is attending college in Dublin, is the sole carer for her two boys following the sudden and tragic passing of her beloved husband Rod in October 2014 following a cardiac arrest.

She has fought hard for many years to secure vital services for her boys. Jane continues to be a formidable advocate, not only for her two sons, but for all family carers. 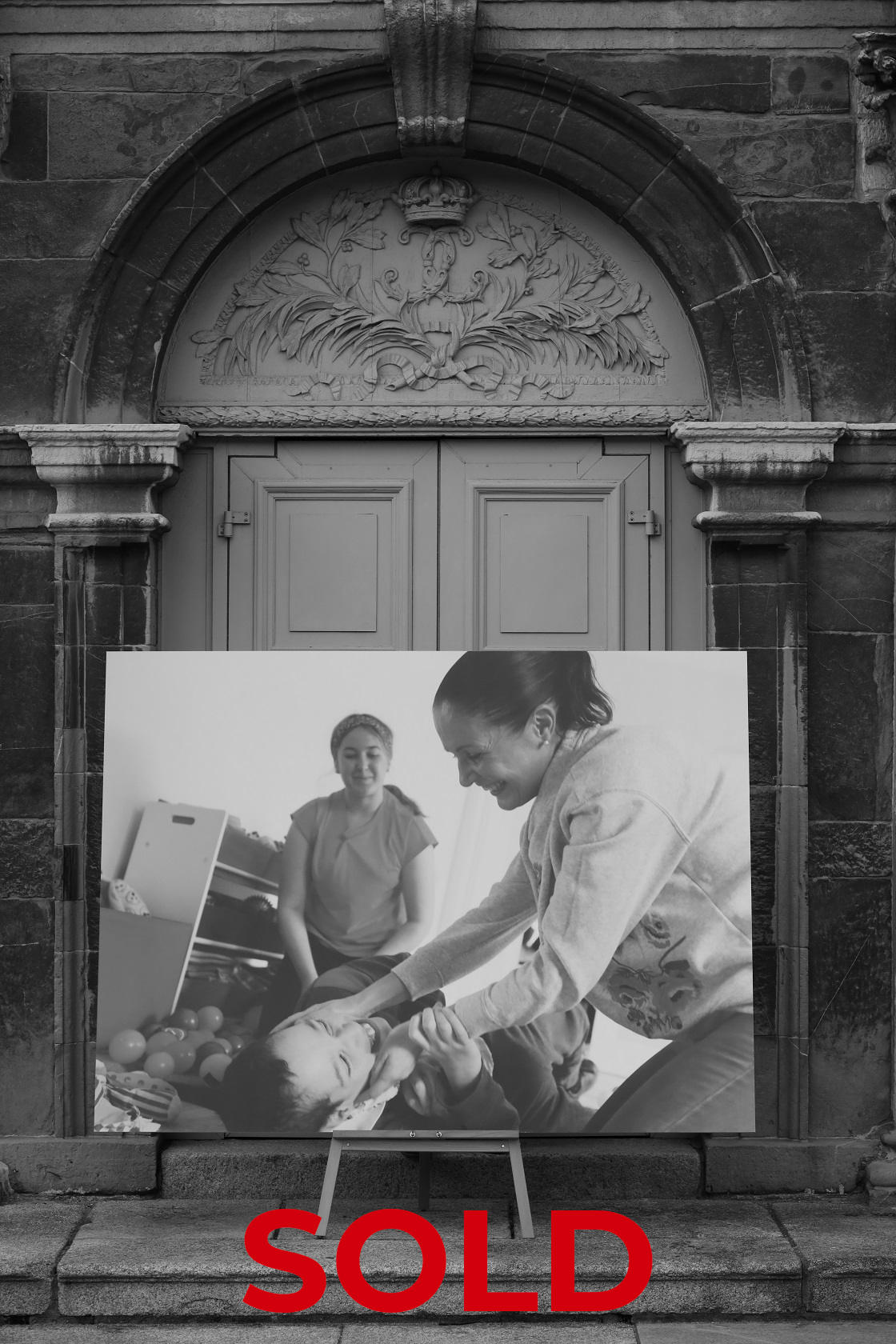 A massive thank you to Horizon Therapeutics who have agreed to purchase this picture.

Daniel was born with the rare genetic condition Sotos syndrome which causes severe intellectual disability, epilepsy and a sensory processing disorder. He is non-verbal, incontinent, visually impaired with behaviours that challenge, has low mobility and feeding difficulties requiring 24/7 care.

Sinead is Daniel's primary carer and a powerful advocate for his rights. Through the Daniel’s Voyage fundraising campaign and with the help and generosity of the local community, the family made special adaptations to their home in 2019 to suit Daniel’s needs.

Shauna, who helps her mother care for Daniel, was recognised with a Dublin Young Carer of the Year award in 2018. She has a special bond with her brother and is often the only one that can calm him when he gets distressed. 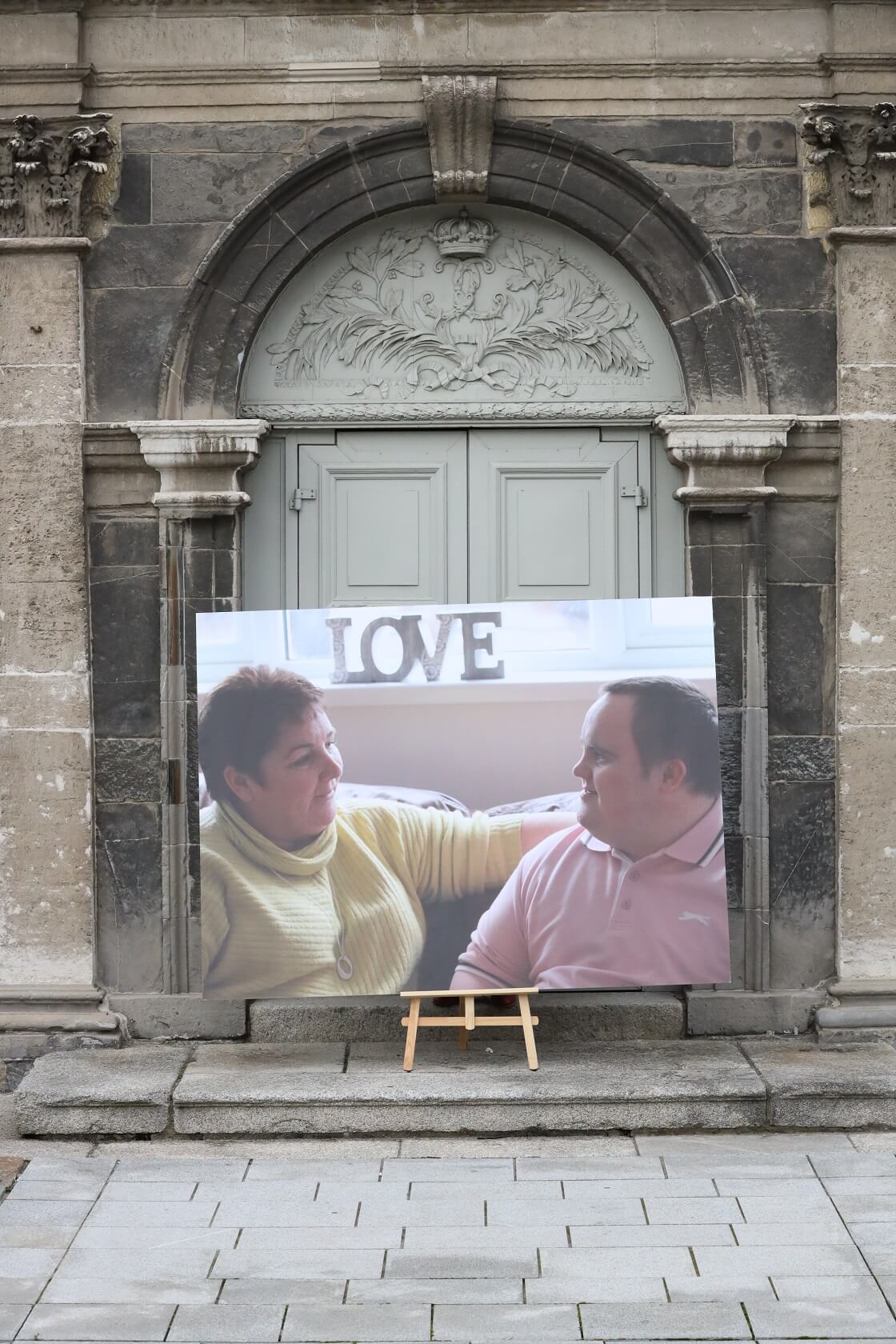 Mum-of-four Rosemary Kratschmar from Walkinstown, Co. Dublin, together with her husband Siegi and her daughter Stephanie care for Sammy who is living with Down Syndrome, hearing loss, epilepsy, sleep apnoea and ADD.

Rosemary has fought many battles for Sammy’s health and education entitlements and says the whole family have put a huge amount of effort over many years into helping him to become the friendly, kind and outgoing person he is today.

She has campaigned tirelessly for family carers for many years and has worked closely with Family Carers Ireland in raising awareness and lobbying on behalf of carers across the country.

Speaking about the importance of supporting families, she says: 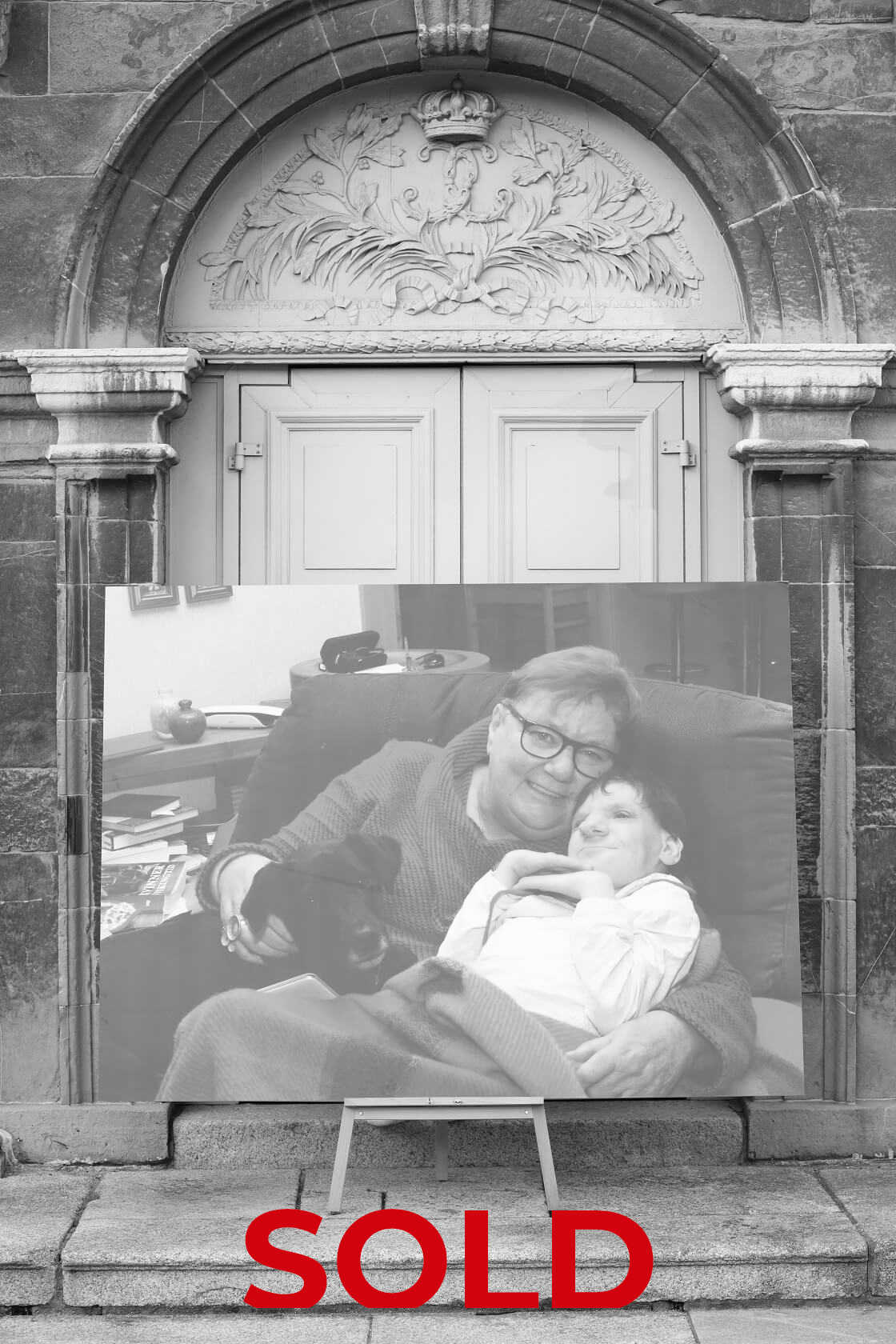 A massive thank you to Galliard Homes who have agreed to purchase this picture.

Johanne Powell, originally from Norway but living in Fethard-on-Sea, Co. Wexford, cared for over 36 years for her beloved daughter Siobhan who was born with a rare chromosome disorder and was intellectually and physical disabled, requiring 24/7 care.

Sadly, Siobhan passed away in August this year amid Covid-19 causing additional stress to an already very difficult time for the family.

Both Johanne and her husband Alan were truly devoted to their daughter who was their only child and spent many years lobbying on her behalf for the provision of services to cater for her needs. In recent years, Johanne had been fighting to secure residential care for Siobhan.

Johanne continues to be a powerful advocate for family carers and people with disabilities. 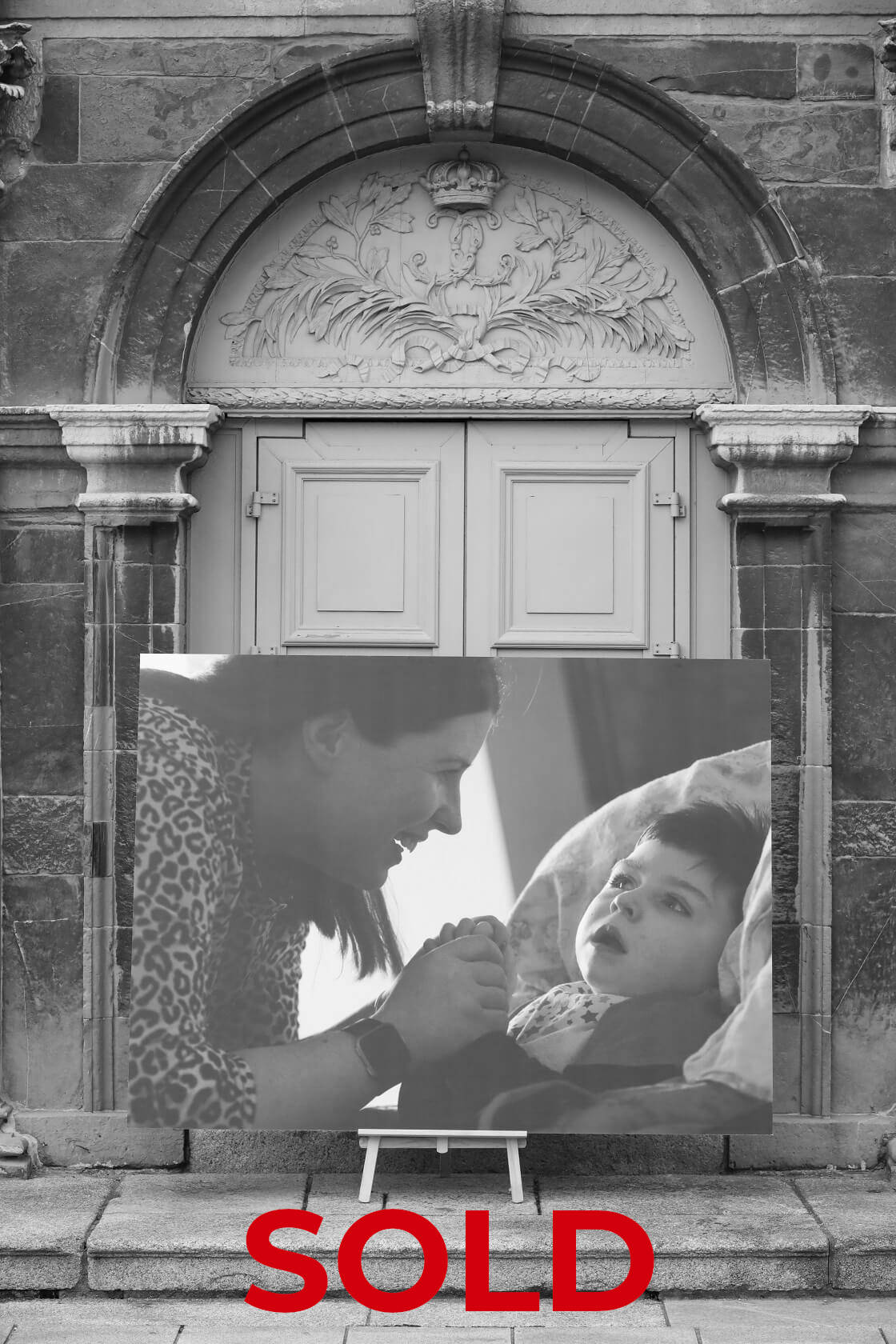 A massive thank you to Hamilton House who have agreed to purchase this picture.

Brenda O’Connell-Barry lives in Charleville, Co. Cork with her husband Trevor and their son Fionn (6) who has NACC1, a rare genetic mutational condition. Fionn is the only known person in Europe with this diagnosis. Having become extremely ill at three months old, he spent the first two years of his life in and out of hospital. Suffering severe cerebral agitations, which can cause him to cry for up to 20 hours a day, Fionn depends on a nasal gastro tube and PEG feeding and requires round the clock care.

Brenda and Trevor refuse to give up hope for a day when Fionn doesn’t suffer. Brenda herself has a highly debilitating illness called Systemic Lupus and has undergone chemotherapy treatment to alleviate the pain.

Brenda was named the National Netwatch Carer of the Year in 2018 and says she is fortunate and blessed to be an ambassador for all family carers. 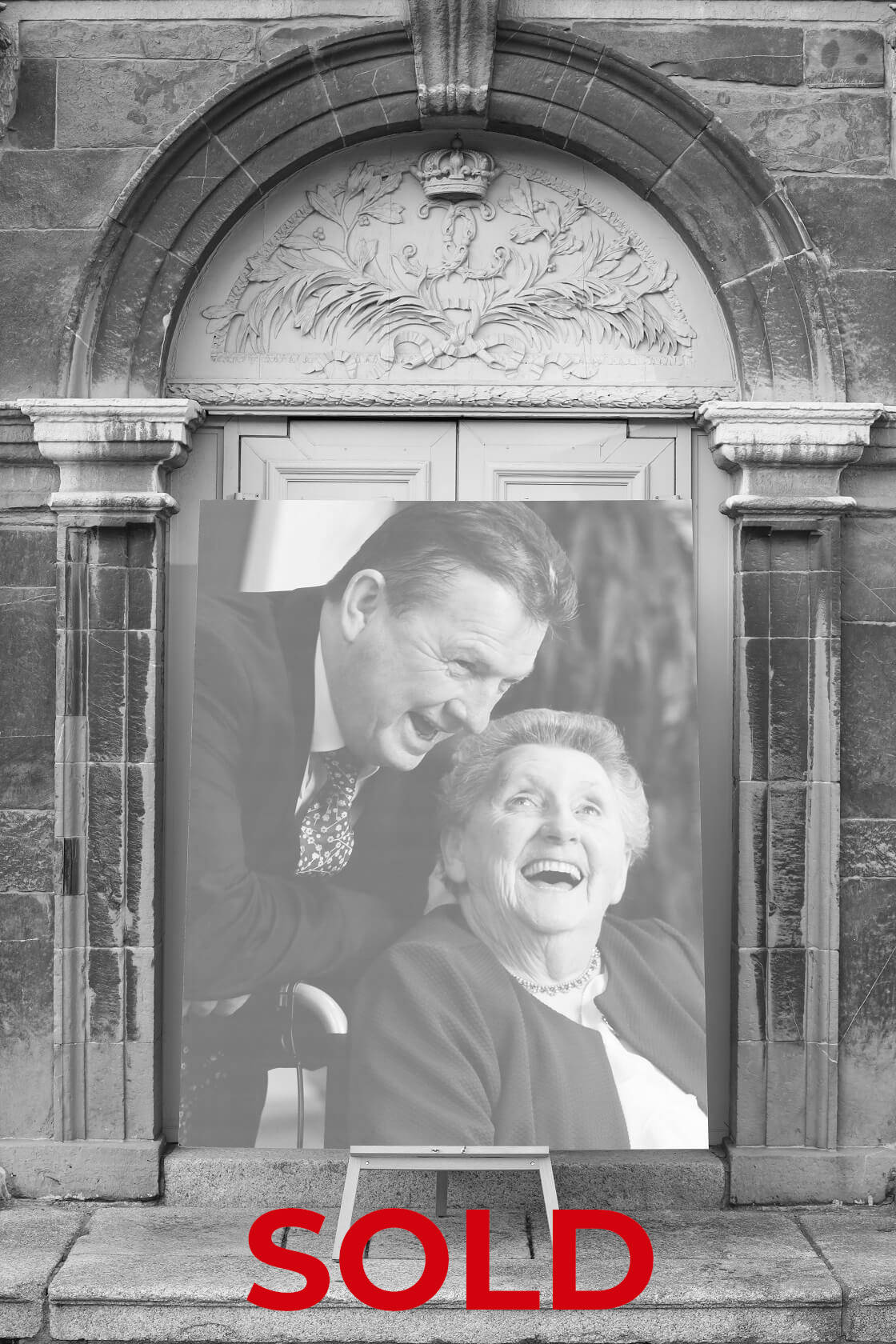 A massive thank you to HaloCare who have agreed to purchase this picture.

Known to his friends as Miah, he took early retirement to care for Lucy who is blind, has limited mobility and type 1 diabetes which requires multiple injections every day. His brother James is also diabetic and has mental health difficulties.

Miah, who was named the Netwatch Cork Carer of the Year in 2019, devotes his life to making sure that his mother and brother are happy and healthy.

“She looked after me and now it’s time for me to look after Mam. Thank God I’m able to do that and the same for James. You do it for the love of them. I love them both.” 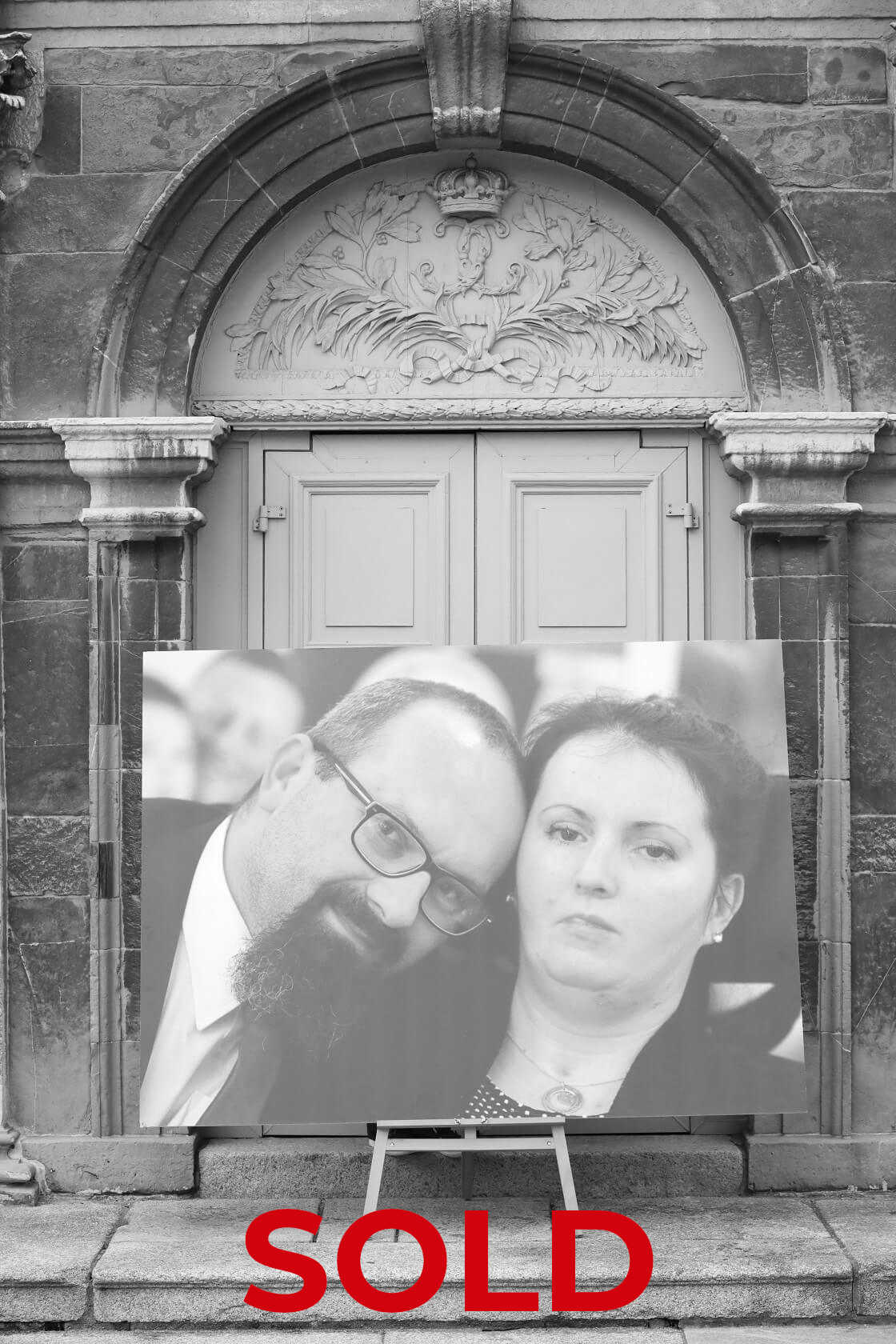 A massive thank you to an anonymous donor who has agreed to purchase this picture.

Marcin Filak from Kildalkey, Co. Meath cares for his wife Ola and their two children including their eldest, Piotr, who is on the autism spectrum.

Ola suffered a catastrophic brain stem stroke on November 2017, three weeks after the birth of the couple’s daughter Anastasia, resulting in locked-in syndrome. Her condition means she is aware of her surroundings but cannot move or speak and now communicates through eye movements. The couple are originally from Poland but moved to Ireland in 2016.

Throughout Ola's 18 months in hospital, Marcin was by her side every day and always maintained that he would make her dream to come home a reality. He left his job as a farm equipment engineer and undertook extensive training in order to be able meet his wife’s care needs at home.

Marcin was named the National Netwatch Carer of the Year in 2019 in recognition of the extraordinary care he provides for his family and he is truly an inspiration to us all. 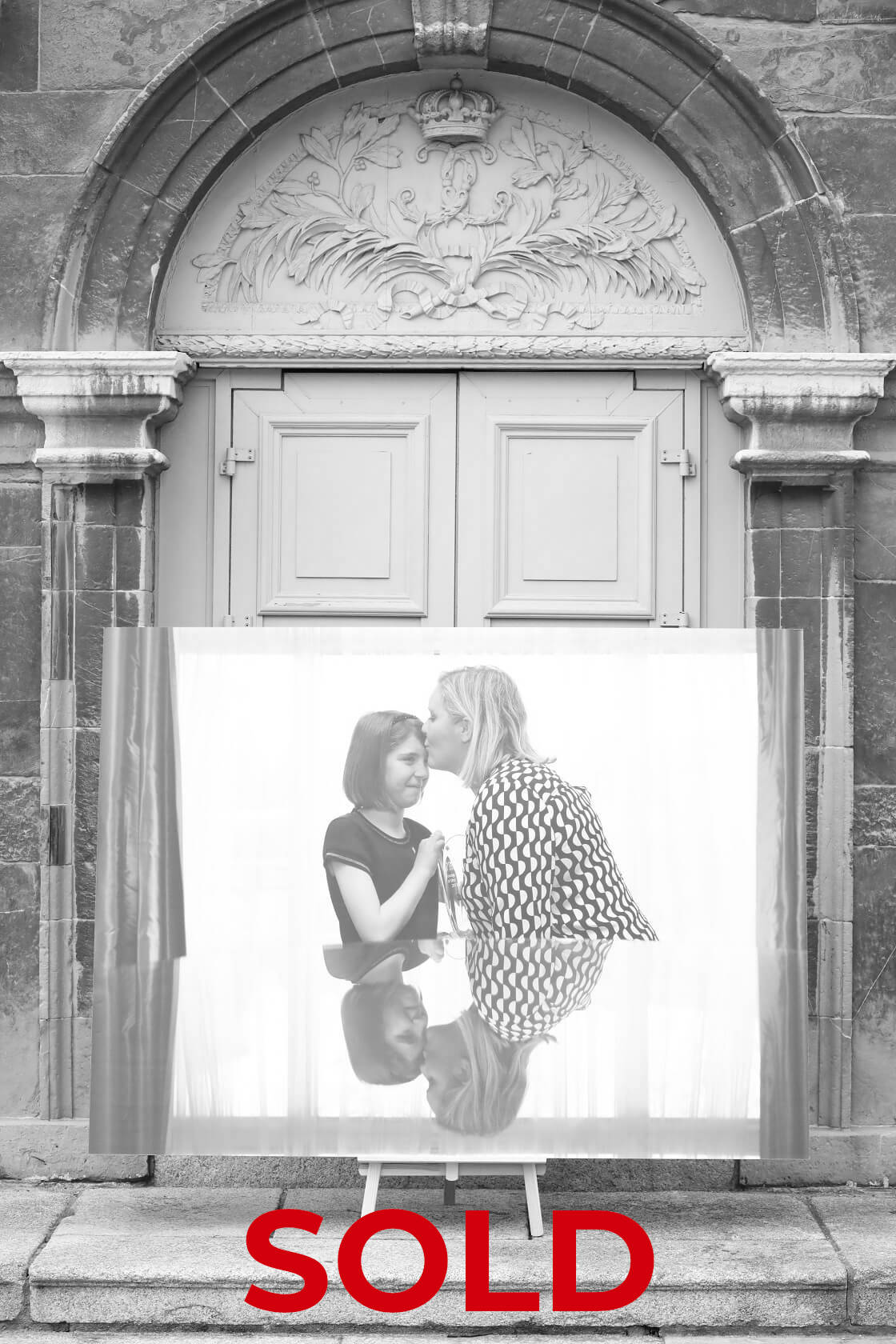 A massive thank you to Allglass Windscreens who have agreed to purchase this picture.

Twelve year old Hailey Golden from Breaffy, Castlebar, Co. Mayo helps her parents care for her brothers Conor, Jack and Max, all of whom have special needs.

Despite her tender years, Hailey has learned ‘Lámh’ – a special sign language – and ‘Picture Exchange Communication’ to communicate with her siblings. Every day, she assists with feeding and dressing, helps the boys to use their speech devices, reads stories to them and even sings her brother Conor to sleep every night.

Hailey was named the Netwatch Connacht Young Carer of the Year in 2019 in recognition of her remarkable dedication to her three brothers.

Her mum Amanda, who nominated Hailey for the award, says that she is a brilliant big sister to her brothers and that “we would be lost without her”. 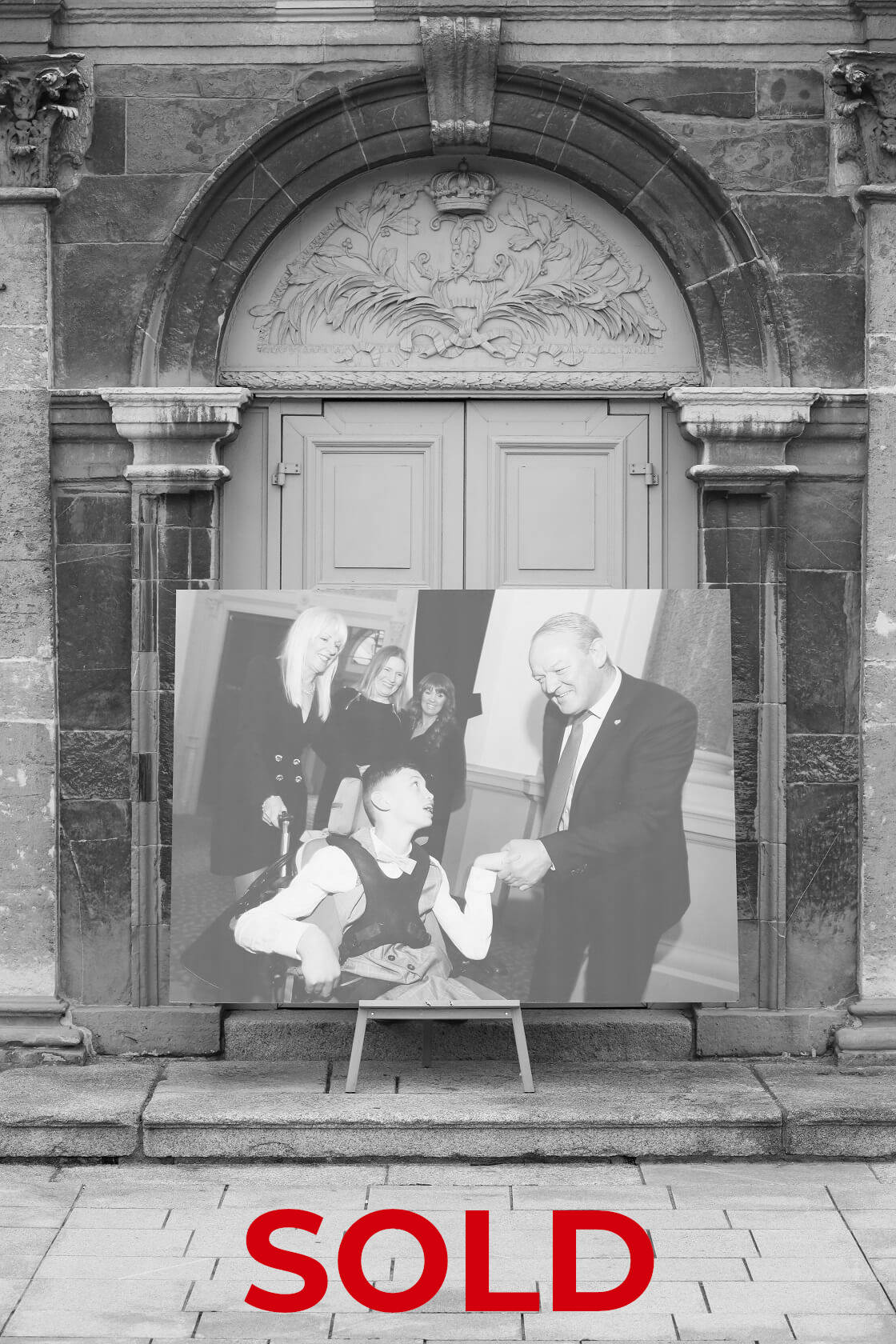 A massive thank you to Netwatch who have agreed to purchase this picture.

Lynsey O’Donovan (pictured third from left) from Swords, Co. Dublin is full-time carer to her son Jack (17) who has cerebral palsy, epilepsy, is confined to a wheelchair and is non-verbal.

Lynsey has shown unending devotion in caring 24/7 for Jack, encouraging him to develop into the contented young man he is now. Jack’s three younger sisters, Lynsey and her husband Cathal have all done the Lámh course to enable them to communicate with each other and he is a typical teenager of his age thanks to the care and love shown to him all his family.

Lynsey was named the Netwatch North Dublin Carer of the Year in 2019. Pictured above is a special moment following the awards ceremony where a delighted Jack met with Irish and Munster rugby legend and Netwatch Ambassador Mick Galwey. 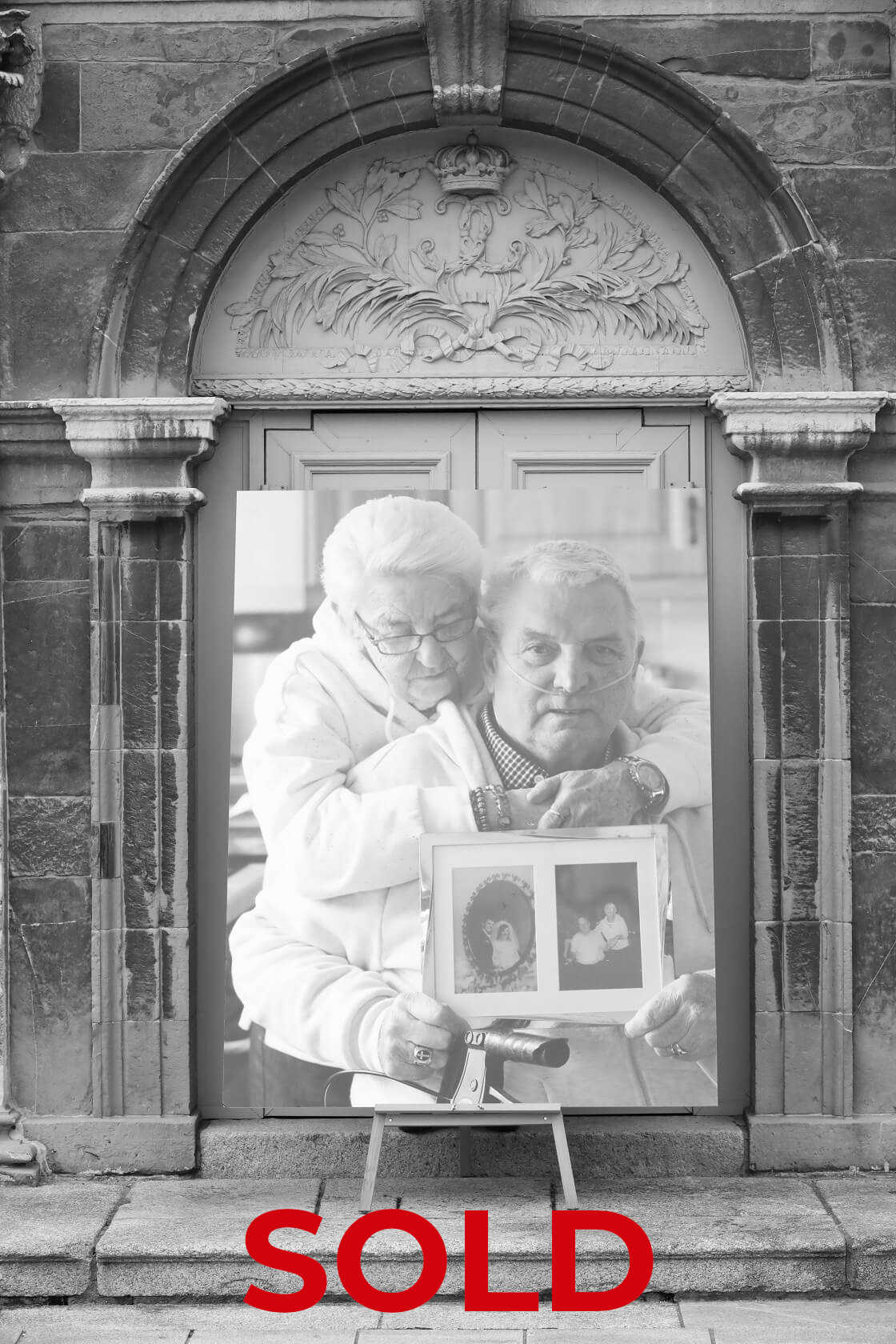 A massive thank you to an anonymous donor who has agreed to purchase this picture.

Maureen Kelleher from Larchfield outside Cork City cares for her husband Dan who is a wheelchair user and lives with COPD – a chronic lung condition that requires him to be on oxygen 24/7.

The couple have been married for over 50 years and Maureen has been caring for Dan at home for over 16 years.

She says that her husband spends a lot of time in and out of hospital and does suffer a lot with his chest. Dan can’t be left alone for fear he could pass out from coughing.

Paying tribute to his wife’s love and dedication, Dan describes family carers as “angels” and says he is incredibly grateful and lucky to have Maureen caring for him.

Buying a portrait is simple and your support will make a real difference to the lives of family carers most in need in communities all across Ireland.