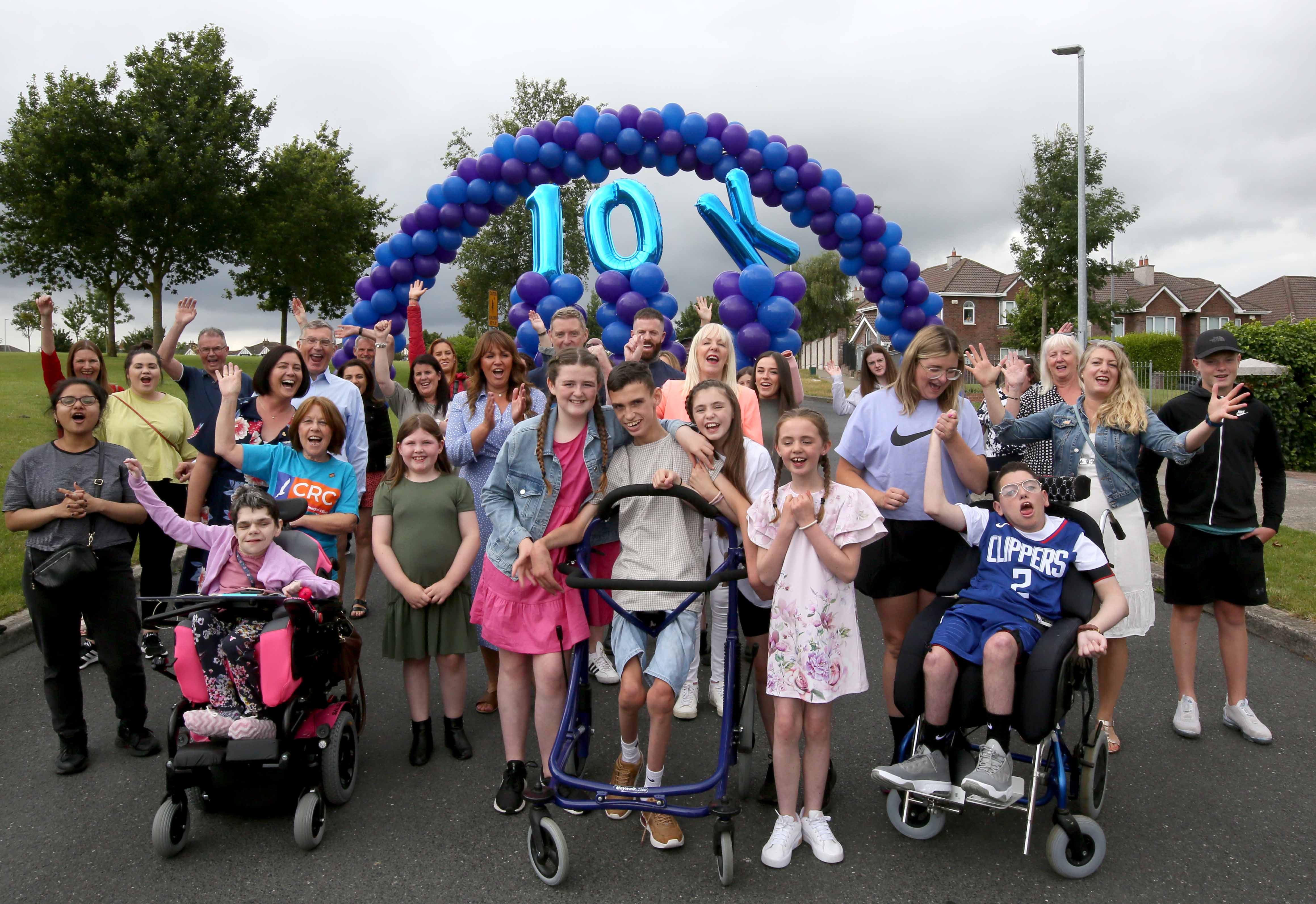 31 July 2021: An inspirational teenager from Dublin has completed his own version of an Olympic triathlon to give back to two charities that have helped him and his family throughout the Covid-19 pandemic.

Jack O’Donovan (18) has cerebral palsy, epilepsy, is confined to a wheelchair, PEG-fed and non-verbal but none of that has stopped him from raising vital funds for Family Carers Ireland and the Central Remedial Clinic.

Over the past two weeks, Jack has completed his version of a 10k triathlon by taking to the roads and the waterways with the help of his devoted parents Lynsey and Cathal and his three sisters, young carers Sophie, Robyn and Katie.

Watched by family, friends and neighbours outside his home in Swords, the crowd chanted Jack’s name as he crossed the finish line. His mum Lynsey said she was proud of Jack's achievement: “Jack is the most amazing, determined and happy young man. We are so proud of him. No matter what challenges he faces every day, he always comes out on top, he's so strong and resolute and we couldn't ask for more.”

Jack requires 24-hour care, so when his home support was stopped during the lockdown, his parents and younger sisters all took on extra responsibilities alongside the usual tasks of washing, dressing, feeding, administering his medication and even turning him regularly overnight.

When schools were forced to close, life became even tougher for the family. While his parents and sisters provided Jack with the best of care, Family Carers Ireland and the Central Remedial Clinic were on hand to help whenever they needed it.

Reflecting on an extremely difficult year, Lynsey explained: “Due to Covid-19 restrictions, we had our nine hours of home support a week stopped, school stopped, everything stopped. Jack had nothing then. But what helped us through were the regular calls from Jack’s school and therapists in the CRC, and calls from Family Carers Ireland. It means a lot when you’re here on your own and trying to get by. That’s why we wanted to complete this challenge and give something back.”

Funds raised for Family Carers Ireland will be directed to their hardship fund, which was set up as a result of the pandemic last year. The fund supports family carers who are in emotional, physical and financial crisis and has put food on tables, oil in tanks, paid for sensory equipment, behavioural assessments, hydrotherapy baths, specialised wheelchairs, respite and so much more.

Monies raised for the CRC will go towards the refurbishment of the national feeding clinic based in Clontarf’s speech and language department. The clinic is often the first port of call for parents with new-born babies diagnosed with disabilities. Jack was three months old when he started attending the CRC and it was when he was seven years old that his mum and dad started to receive regular services from the feeding clinic as Jack developed difficulties with swallowing and eating.

John Dunne, CEO of Family Carers Ireland, congratulated Jack on his incredible achievement: “A triathlon can be a gruelling event for any adult, so it’s no wonder Jack has become an inspiration to so many people. His commitment and perseverance to complete this mammoth task is quite incredible. It shows us all the true meaning of sport and giving back. The money that Jack has raised will support family carers who are in crisis due to Covid-19.”

Živa Newman, Head of Fundraising in the CRC, commended Jack on his dedication and perseverance in completing the 10k triathlon: “He is our Olympic gold champion never giving up and making his mam and dad and his three sisters, family and friends proud of him and his generosity by giving back. The monies that Jack raised will go towards refurbishing the national feeding clinic in CRC Clontarf which supports babies, children, teenagers and adults having problems with feeding, eating, drinking and swallowing.”

Family Carers Ireland is the national charity supporting the 500,000+ family carers across the country who care for loved ones such as children or adults with physical or intellectual disabilities, frail older people, those with palliative care needs or those living with chronic illnesses, mental ill-health or addiction. It provides a range of services and supports for family carers through its Carer Support Centres nationwide and through its National Freephone Careline 1800 24 07 24. See www.familycarers.ie