It's Time To Care For The Forgotten Frontline

Platitudes won’t put food on the table or give family carers a break!

Thursday 23rd September 2021: Family Carers Ireland is hitting out at the Government’s failure to support the over 500,000 people currently looking after a loved one at home saying platitudes do not put food on the table or provide vital respite breaks to those caring 24/7 for family members with highly complex needs.

The national charity representing Ireland’s family carers is briefing Oireachtas members today on its pre-budget submission – The Forgotten Frontline. The document outlines six key asks including an annual entitlement to 20 days of respite for family carers as part of a statutory homecare scheme; a €150 increase in the Carer's Support Grant; an €8 rise in weekly carer payments; gradually bringing Carer’s Allowance income disregards in line with average weekly earnings; a refreshed National Carers’ Strategy and €5m in funding to deliver the 'Carer's Guarantee' proposal of a core basket of services to family carers across the country, regardless of where they live.

Launching the submission, Catherine Cox, Head of Communications and Policy, Family Carers Ireland said: “The Programme for Government states that ‘family carers are the backbone of care provision in Ireland. They deserve support and recognition from Government’. Those are noble sentiments but the truth is that throughout this pandemic, the needs of family carers were ignored, they were left without vital support services and suffered severe hardship as a result. Our crisis fund was significantly depleted such was the demand for support over the past 18 months.

“The expectation that family carers will provide at least 35 hours each week for just €219, €16 more than basic social welfare rates, is untenable. The majority of family carers do not in fact receive any Carer’s Allowance while for the 89,000 who do, half receive a reduced rate due to other means and are therefore likely to receive even less than the basic social welfare rates. The inadequacy of this has been further highlighted by the establishment of the Pandemic Unemployment Payment (PUP) at €350 per week.

“Our family carers are at the frontline of healthcare every day – not just during the pandemic – and it is deeply concerning that they have no entitlement to any time away from their caring role. We firmly believe that the introduction of a statutory homecare scheme should include an annual respite entitlement of 20 days for family carers, in line with the basic annual leave entitlement for paid employees.

“Family carers are the forgotten frontline and they cannot be ignored in the forthcoming budget. The cost to the exchequer of our asks must be seen in the context of the 19 million hours of unpaid care provided each week by family carers which would cost the state €20bn a year to replace.”

Joan Daly from Dublin, who cares for her 15 year old daughter Sophia who has cerebral palsy, arthrogryposis (limited joint movement) and scoliosis, said: “We are constantly fighting for better supports for our daughter Sophia – everything is a battle with access to services depending on where you live (post code lottery). I constantly worry about our finances and the future – will I be entitled to a contributory pension when I reach 66 or will all my years of care be ignored? I firmly believe that Carers Allowance should be based on needs rather than means”.

Family Carers Ireland is calling on the Government to use Budget 2022 to demonstrate their commitment to family carers by delivering on six key priorities.

Committed to in the Programme for Government, the Carer’s Guarantee promises an end to the geographic disparity in services across the country and a uniform delivery of a core services including (i) access to emergency respite; (ii) intensive one-to-one support for carers in crisis; (iii) training programmes ranging from basic care skills workshops to QQI accredited ‘Caring with Confidence’ training; (iv) targeted support groups and carer networks and (v) access to information and advocacy clinics in local communities, primary care centres and hospitals

The annual Carer’s Support Grant is an important payment that recognises the unique contribution of family carers. Family Carers Ireland is calling for the Carer's Support Grant to be increased to €2,000 in Budget 2022 in line with recommendation made by the Citizens’ Assembly.

Long periods out of the workforce while providing care, means many long-term family carers are unable to qualify for a State Contributory Pension. This combined with the modest means test for a State Pension Non-Contributory puts carers at a high risk of falling into a ‘pension gap’. The Government has committed to developing a pension solution for family cares that recognises their important work in their programme for Government and needs to act on that commitment now.

The Irish health system is undergoing a period of reform, some planned – such as the implementation of Sláintecare – and some a result of the Covid-19 pandemic. This time of flux gives the government an opportunity to examine the place of carers in the Irish healthcare system and develop a National Carers’ Strategy and action plan for the period 2021 – 2025, alongside ringfenced funding for its delivery.

Unlike other workers who are entitled to 4 weeks paid leave, at present, family carers are not entitled to a single day’s respite, and between 2009 and 2019 there was a 65% increase in the number of carers who have no access to it whatsoever. This is despite the impact it has on their mental and physical health.

The establishment of the Statutory Homecare Scheme, which is promised in the Programme for Government, should be given utmost priority with funding made available in Budget 2022 to meet the demand implications of its introduction.

Carers are facing a multitude of significant challenges including difficulties with the recruitment and retention of homecare workers, a lack of clarity around respite places and beds available, and the unsuitable classification of Carer’s Allowance as a ‘social assistance’ payment. All of these issues will be exacerbated by the increasing reliance on informal care as Ireland’s population ages. Now is the time to reassess the system of care and value we place on it.

Family Carers Ireland estimates that, almost one million additional people provided unpaid care to loved ones during the pandemic, paying out of their own pocket for PPE, and under immense stress to keep their loved one safe and healthy even when services were shut. 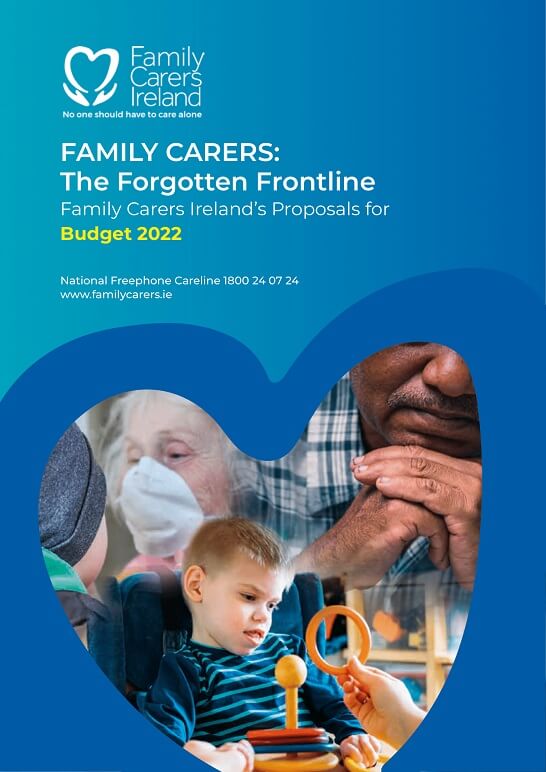